In 2005, Berlin dedicated this memorial to Jews who died in the Nazi Holocaust. 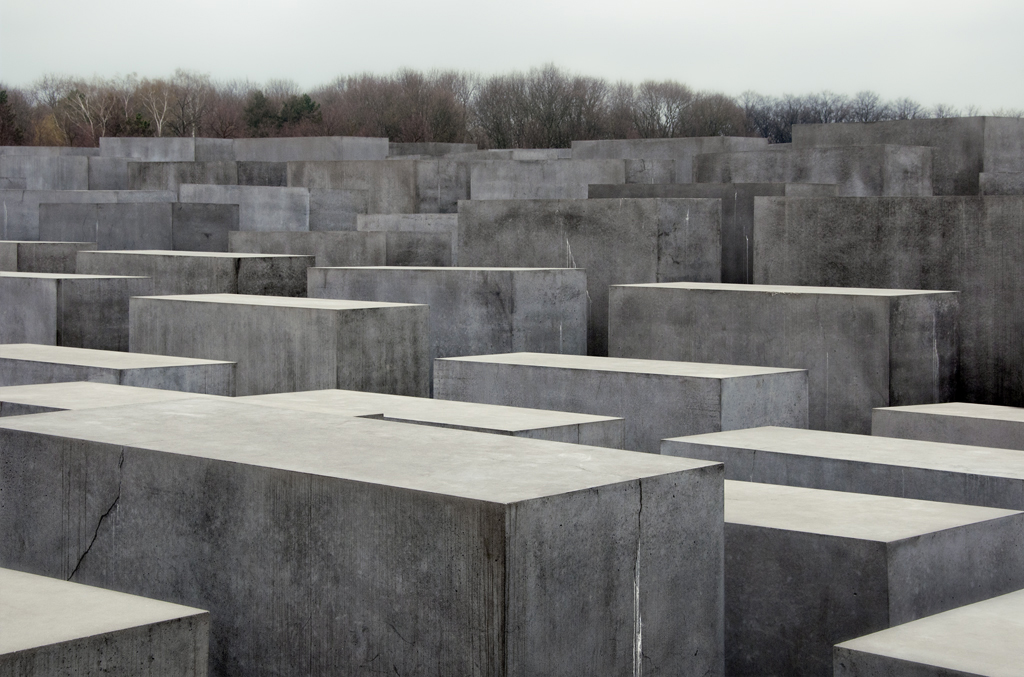 Memorial to the Murdered Jews of Europe, Berlin 2010

Today’s image is the last in a series of photographs from historic Berlin. Memorial to the Murdered Jews of Europe serves as the transition piece from Nazi Berlin to modern Israel in my exhibition CITIES OF STONE – PEOPLE OF DUST, on view at the Red Wall Gallery in Ottawa until September 2nd.

The Memorial to the Murdered Jews of Europe is located in the heart of Berlin near the Brandenburg Gate, where the Berlin Wall used to divide East and West Berlin. Design by American architect Peter Eisenman, this Holocaust memorial was inaugurated on May 10th, 2005, sixty years after the end of World War II.

The area covers four and a half acres, and consists of 2,711 blocks or stelae arranged in a grid. Narrow, undulating pathways run between the blank, concrete stelae which measure 7 feet 10 inches long, 3 feet 1 inch wide, and vary in height from 8 inches to 15 feet 9 inches. The site reminds one of an ancient graveyard, such as the Jewish cemetery on the Mount of Olives in Jerusalem. “I fought to keep names off the stones, because having names on them would turn it into a graveyard,” said Eisenman.”I like to think that people will use it for short cuts, as an everyday experience, not as a holy place.”

Beneath the memorial, an underground information centre holds the names of all known Jewish Holocaust victims; these names were obtained from the Israeli Holocaust History Museum at Yad Vashem in Jerusalem. Originally Eisenman objected to the inclusion of an information centre under the field of stelae, but later he said, “One is the unforgettable, which is the silence of the field; the other is the memorable, which is recorded in the archives.”

Over 70 years after Hitler and the Nazis came to power in 1933, Berlin dedicated this memorial to the more than six million Jews who died in the Holocaust, the murdered Jews of Europe.