Praying at the Western Wall, Jerusalem

“Jerusalem is full of used Jews, worn out by history…” 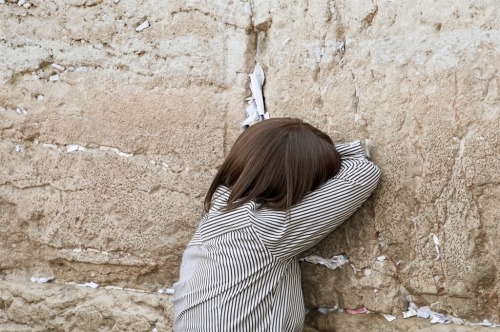 And the eye yearns toward Zion all the time. And all the eyes
of the living and the dead are cracked like eggs
on the rim of the bowl, to make the city
puff up rich and fat.

Jerusalem is full of tired Jews,
always goaded on again for holidays, for memorial days,
like circus bears dancing on aching legs.

excerpt from Jerusalem Is Full of Used Jews, in Poems of Jerusalem and Love Poems, by Yehuda Amichai

The lines above are taken from the same poem that I quoted yesterday, written by the celebrated Israeli poet Yehuda Amichai. He was born in 1924 in Germany to an Orthodox Jewish family that immigrated to British Palestine in 1935 and settled in Jerusalem. When he was 22, Amichai started writing poetry, and he later became poet in residence at several universities, including Berkeley, New York University, and Yale.

Amichai was a soldier, a teacher, a scholar, and an internationally acclaimed poet. He wrote in Hebrew, and his works have been translated into more than 35 languages. Yehuda Amichai is also known as a peace advocate who worked with many Arab writers and Palestinian poets. He is quoted as saying: “I have no illusions. It’s quite difficult for poets to communicate with one another in a society that is politically torn apart the way ours is.” Amichai continued to live in Jerusalem until his death in 2000.

Women at the Western Wall, Jerusalem

“What does Jerusalem need? It doesn’t need a mayor, it needs a ring-master…”

The Western or Wailing Wall is a 187-foot long section of ancient wall located on the western side of the Temple Mount. It is a retaining wall built by Herod the Great around 19 BCE. He expanded the plateau where the First and Second Temples stood, creating a wide expanse which is still called the Temple Mount. In 70 CE, Romans destroyed the Second Temple, and subsequently the Western Wall became the holiest of all Jewish sites.

Today, tension still surrounds this sacred place. In order to enter the huge plaza in front of the Western Wall, visitors must pass through airport style security. The fenced off prayer area at the base of the wall is divided into a large men’s section and a smaller women’s section. In the women’s section, most individuals are engaged in silent prayer and contemplation, and many visitors place written prayers in the cracks between the stones. These enormous pieces of limestone weigh between two and eight tons each. Altogether, the wall consists of 45 rows of stones, 28 above ground and 17 underground.

What does Jerusalem need? It doesn’t need a mayor,
it needs a ring-master, whip in hand,
who can tame prophecies, train prophets to gallop
around and around in a circle, teach its stones to line up
in a bold, risky formation for the grand finale

Later they’ll jump back down again
to the sound of applause and wars.

excerpt from Jerusalem Is Full of Used Jews, in Poems of Jerusalem and Love Poems, by Yehuda Amichai

For centuries, the Western Wall has been a site for Jewish prayer and pilgrimage. 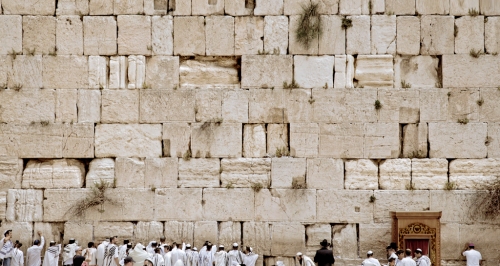 The Old City of Jerusalem covers approximately one square kilometer, and is divided into the Armenian, Jewish, Muslim, and Christian Quarters. Inside the city walls, there are many holy sites sacred to Muslims, Christians and Jews, including the Al-Aqsa Mosque, the Church of the Holy Sepulchre, and the Western Wall.

The Western or Wailing Wall is located at the base of the western side of the Temple Mount. It is a remnant of the ancient wall that surrounded the Jewish Temple’s courtyard, and it is one of the most sacred places in Judaism, after the Temple Mount itself. Much of the wall was built by Herod around 19 BCE.

For centuries, the Western Wall has been a site for Jewish prayer and pilgrimage. With the rise of the Zionist movement in the early 20th century, the wall became a source of friction between Muslims and Jews. After the 1948 Arab-Israeli War, the wall came under Jordanian control; Jews were barred from the site for 19 years, until Israel occupied the Old City in 1967.

The men’s section of the Western Wall is always bustling with activity. Many Bar Mitzvahs take place here, and a Torah cabinet is visible in this photograph. A number of men are wearing the tefillin, two small black boxes with straps; these boxes contain tiny scrolls upon which are written four Biblical passages. At the base of the wall, individuals engage in private prayer, tourists take pictures, and larger groups participate in special events.