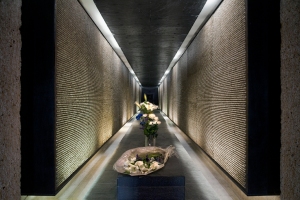 Memorial to the Martyrs of the Deportation, Paris 2009

Memorial to the Murdered Jews of Europe, Berlin 2010

Having completed a major study of change and continuity in Paris in 2009, I travelled to Berlin in 2010 to continue my urban explorations. Somehow, Paris led to Berlin, and Berlin led to Jerusalem.

My journey to Israel in 2011 really started in Berlin. After completing a series of photographic studies of Nazi architecture and the Berlin Wall, I felt compelled to travel to Israel – another charged landscape. Put simply, I wanted to explore the link between historic Berlin and modern Israel. Berlin was my springboard to Israel, both literally and figuratively.

In both places, I was fascinated by the theme of loss, longing and lamentation – individual and collective. Loss of land, loss of innocence, loss of humanity, loss of freedom, loss of life: these notions haunted me in Berlin and in Israel. For me, the power of these iconic locations lies in the responses that they elicit from ordinary individuals.

After returning home from Israel, I was both intrigued and perplexed by what I had seen while observing everyday life in Jerusalem. I wanted to make some sense out of what I had witnessed. I do not pretend to understand the horrors of the Holocaust, the long and complex histories of the Holy City, or the current politics of the Israeli-Palestinian conflict.

However, the one question that kept running through my mind as I explored historic Berlin and modern Israel was: at what cost?