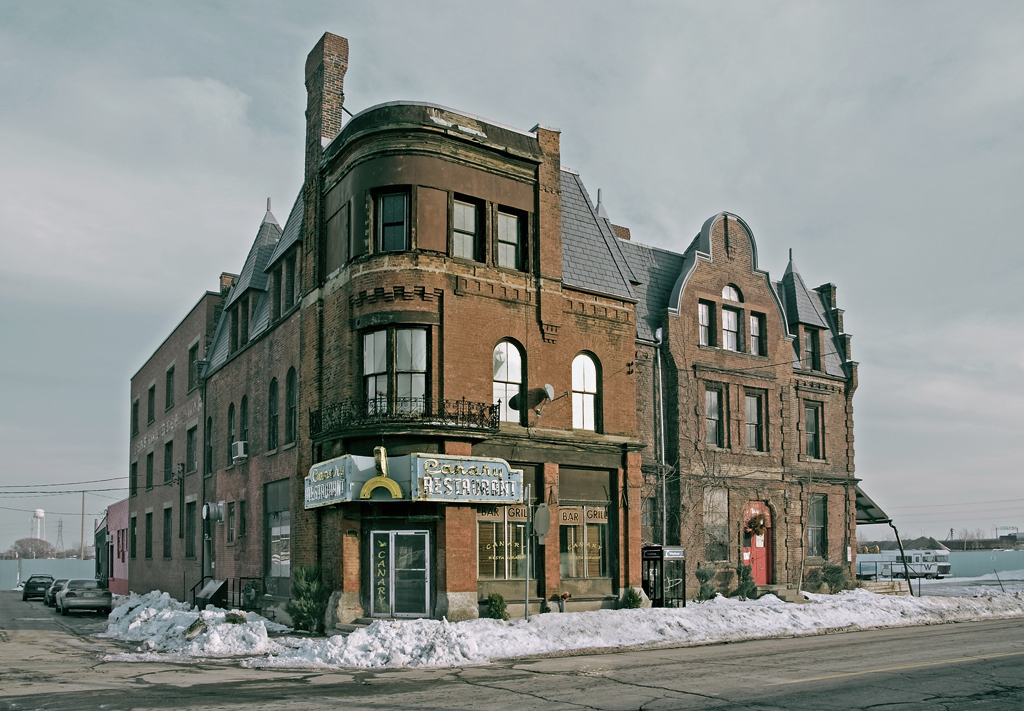 This photograph was taken just a few months after The Canary closed its doors for the last time in April 2007. Today, nothing is left on the exterior of the building to remind passersby of this well-known Toronto diner, and the interior of the restaurant has been gutted to the walls.

The Canary operated here, at the corner of Cherry and Front Streets, from 1965 until 2007. The restaurant originally opened in 1960 at Dundas and University, where it remained until moving to its second and final location in 1965. The Canary endured for almost half a century, and during all that time it was run by members of the Vlahos family.

Construction of the hybrid building shown in this photograph started in 1859 with the Palace Street School, which was the section on the right. It operated as a school for 45 years and then became the Irvine House Hotel, the Cherry Street Hotel, and various other establishments. Later, General Steel Ware occupied the warehouse addition on the left side of the structure. Eventually, The Canary joined the mix in 1965, occupying the building smack dab in the middle.

The Canary, with its 1960s diner atmosphere and Maple Leafs paraphernalia plastered on the walls, has been a Toronto favourite for a cheap and cheerful breakfast or lunch, drawing everybody from truck drivers to hockey players. www.thestar.com/News/article/198401

In 2007, I photographed more than 30 diners, both vintage and contemporary. These include classics such as The Templeton in Vancouver and lost icons such as The Canary in Toronto. This is a study of retro diners from Atlantic Canada to the Pacific Coast.

2 thoughts on “The Canary, Toronto: another lost icon”