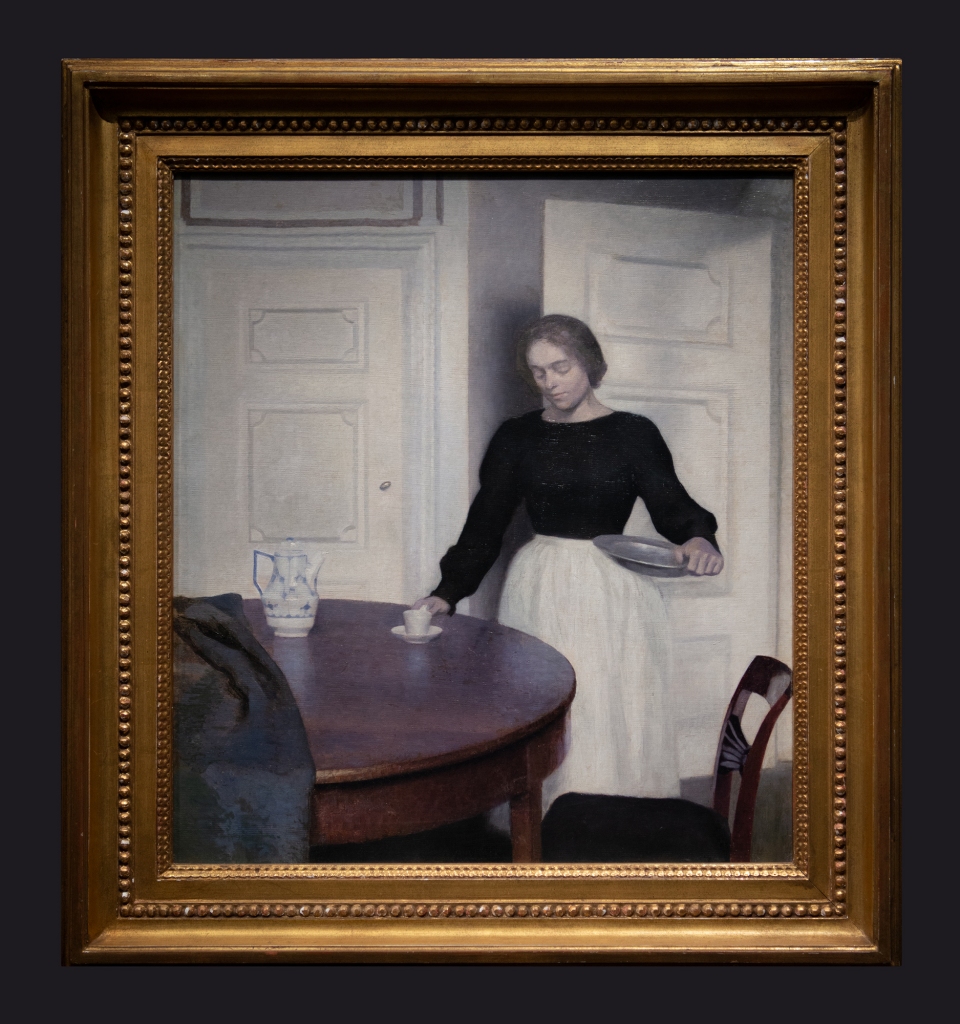 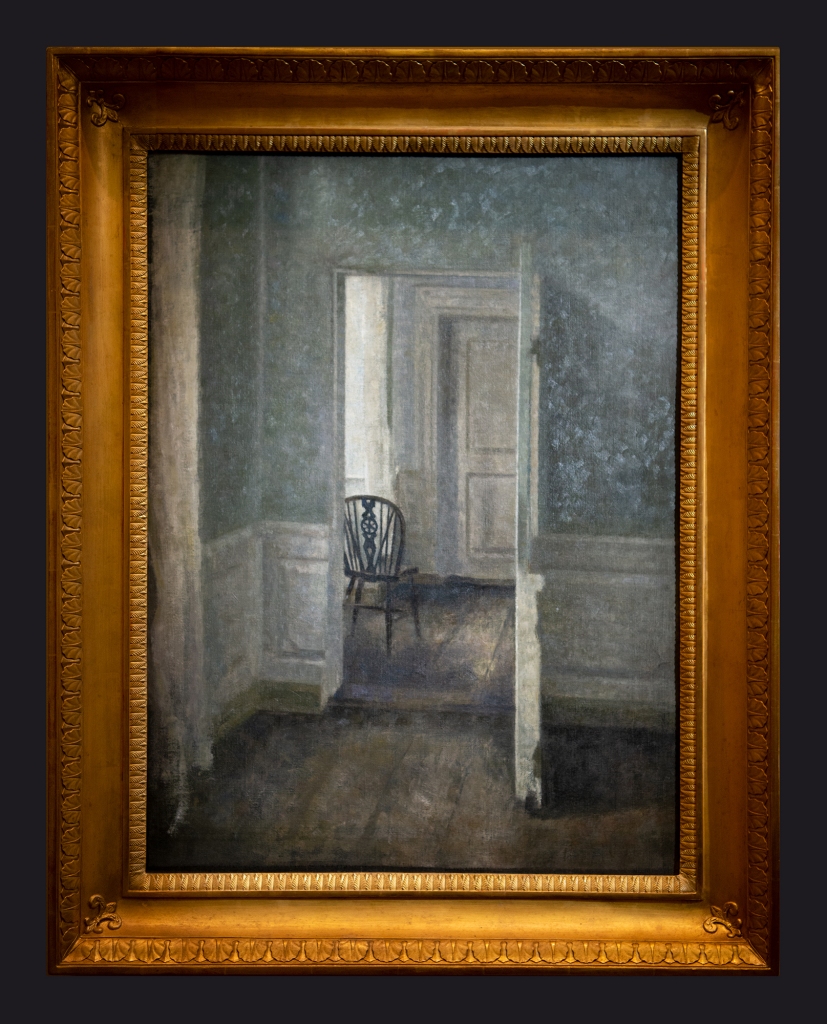 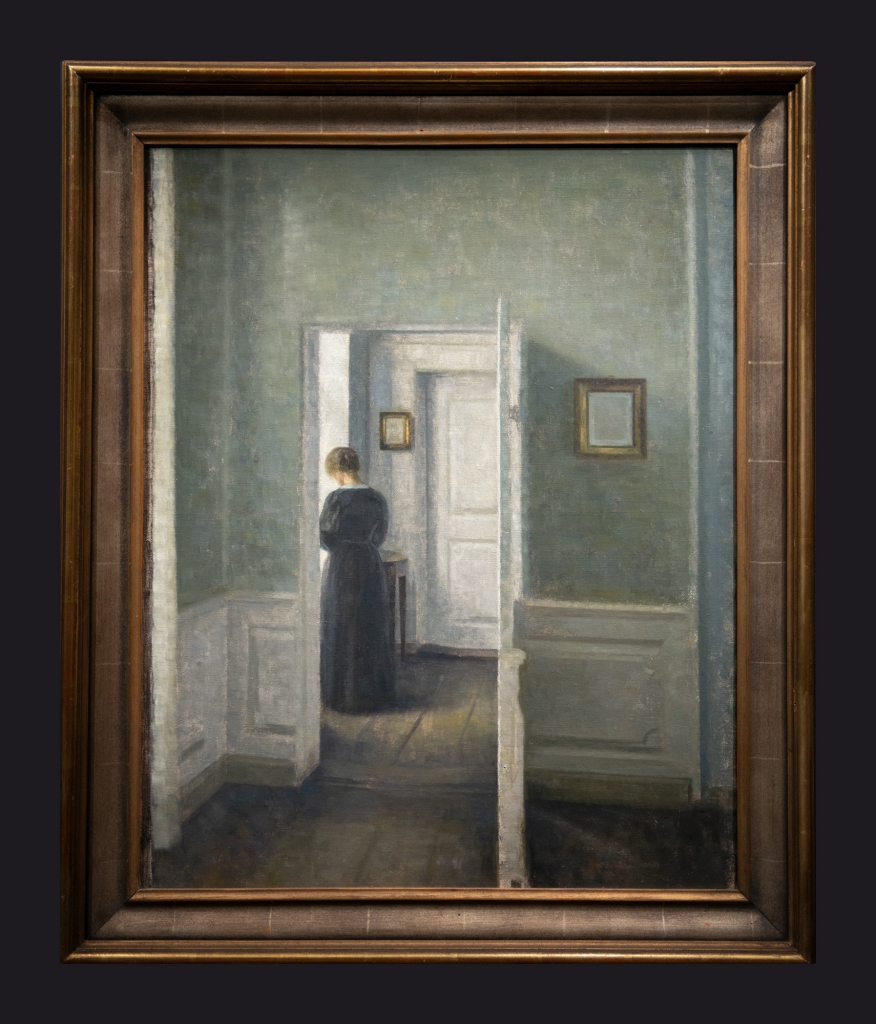 Shown above are five of several interior paintings by Vilhelm Hammershøi that were photographed by Leslie Hossack at the exhibition entitled Hammershøi: The Master of Danish Painting, Musée Jacquemart-André, Paris, 2019. All five are from private collections, the last four from the Ambassador John L. Loeb Jr. Danish Art Collection which was described in the previous post here on Haute Vitrine.

With the first painting above, The White Door (1888), Hammershøi had found his signature motif.

“Hammershøi painted his first empty interior in 1888 in the apartment of his friend Karl Madsen, a painter, art historian, and future director of the Statens Museum for Kunst in Copenhagen. The first thing one notices is the wood stove standing in a corner, which was one of the artist’s recurrent motifs. In this experimental picture, which is held in a private collection, it is The White Door (the title of the work) that provides all the light. The contrast with the dark room is starker than in later works, in which the play of light is rendered with far greater subtlety via a highly detailed technique.”
Press Kit, Hammershøi: The Master of Danish Painting, Musée Jacquemart-André and Culturespaces (2019)

Hammershøi painted the interiors of the apartments that he lived in with his wife Ida, from their first home which they moved to in 1892, until their last where they lived from 1913 until his death in 1916. However, it was their apartment located at Strandgade 30 (1898-1909) that features in the majority of Hammershøi’s interiors; about 60 of his 100 interiors were painted there. His home was his studio, his wife was his model, and his famous interiors were staged versions of their private living quarters.

“Tables and chairs are shuffled around, pictures are rehung, just as door hinges and handles are manipulated in and out of the pictures – all to simplify and tighten motifs, which all then appear as clear geometric structures, and to study the effect of doing so…
Hammershøi was, after all, a master of light, and in his new apartment he found a series of rooms with different light conditions and an inter-connecting succession of rooms that afforded him the opportunity to explore the dynamics of the light.”
Anne-Birgitte Fonsmark & Jacob Bach Riis, At Home With Hammershøi, Ordrupgaard (2018)

Hammershøi’s oeuvre consists of interiors, architecture, nudes, landscapes and portraits. However, it was his interiors that were the most popular in his lifetime (1864-1916) and continue to draw the strongest response today. Hammershøi painted over 100 interiors in the various apartments he shared with his wife Ida in Copenhagen. Their home was both his studio and a major motif in his work.